Georgia is in the race to be the next state to regulate online sports-betting following the introduction of a bi-partisan bill.

Sportsbooks would be taxed on revenues at 16% and would pay a one-off application fee of $50,000. Annual fees of $900,000 would then be excised to retain their licenses.

The bill will not provide for any land-based opportunities and will license online-only operators with remote registration.

The new regulations would see the Georgia Lottery Corporation act as the regulatory authority for the industry.

This means the state would avoid having to set up a referendum asking Georgians whether they want to regulate the activity along with a gambling commission to oversee it.

Those measures were included in Stephens’ regulatory effort that was defeated last year.

Georgia is currently tied in 40th position on the Wedge Index of states’ gaming-friendliness.

Regulation of its online betting sector would give it a boost into the top 15.

Under the current plan, the state’s lottery would be authorized to license six betting brands.

Georgia is one of the top 10 most populated states in the country and is not expected to be short of license applications.

In addition, apart from neighboring Tennessee, none of the other local states have shown signs of wanting to regulate sports betting so far.

This includes ‘Big Four’ state Florida to the south.

Further detail shows that operators would be required to use official league data for their in-play markets.

Such a measure is not surprising as the bill is supported by Atlanta’s four major sports franchises.

They formed the Georgia Sports Integrity Alliance to lobby for the legalization of mobile betting.

All tax revenues will go towards education programs in the state.

The bill does call for problem gambling to be addressed but does not outline provisions for funding. 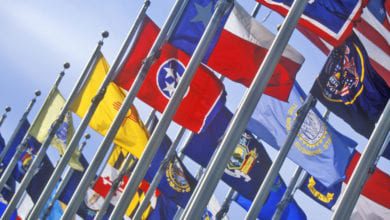